The details of the place is engraved in my memory like a tattoo, the road that divided my life in half and began with a journey of life that I had not planned for. The night had just entered and the columns of light seemed high and the quiet was hovering over the place. And the dread shall be doubled in my head, and I will bring peace and tranquility for my children.

I entered the reception building of the first asylum seekers in France and gave the documents of identity to the competent officer who promised to study them the next morning and gave us a simple room for overnight.
The boys slept quickly after a full day of travel, while I was obsessed with questions. How did you get here? Is it true that I seek asylum? I had my worst night in my life. I decided with myself every moment to retreat and scream around me (I want my homeland … I want to go back). But my tongue was like a poisoned sword that I could not fight. And the faces of my children before me reminded me that I have a safe homeland.The first days in France were far more difficult than I had heard. Difficulties begin with finding out where to stay, enrolling in schools, giving official residence papers. It usually takes a long and boring time, but the hardest is learning the language, understanding with others and living with new people who only know you. I used to record some observations and was able to integrate with families, mostly Syria, and I became aware of the details of their arduous journeys from their homeland and their estates in the countries of the world after the years of fighting they suffered in their country.

Refugee stories tell stories of difficult experiences and homelands that have given their citizens nothing but disappointments and loss. Many families are trying to break up and do not even have time to cry for those who were lost in the war! Young people in the age of roses put their dreams and choose to alienate and risk travel in anticipation of a future that guarantees them a better life than they are, all those difficult images gave me patience to not give up and continue.

I was busy  to provide a suitable life for the children and help them to integrate, assimiliate and study, the task was not easy, especially as they have strong relations with their friends and succeeded in pushing them to overcome the ordeal of alienation and psychological alienation problems, and engaged with them by learning to study the French language, But it enabled me to manage the first steps of the daily deal properly, especially as I am responsible for managing the file of my family alone.

I have been able to communicate with French organizations concerned with journalists and have received promises to work on the condition of being able to speak French and the same situation with organizations concerned with freedom of the press and the right of expression to transmit the images of violations in Iraq. I received an invitation from one of the important research centers in Paris, France, one of the oldest French universities based in Paris to cooperate with them in the conference (Arab States from violence to peace), which I presented a paper titled  “Iraqi Media and its role in the Dissemination of Hate Speech.” It was translated into French and attended by French and Arab specialists and academics.

I have always tried that my living abroad outside my country to be a stronger motive to express my country, and focused on the idea that the nationalities do not mean the geographical areas we live in as much as a doctrine rooted in mind and a multiplier work to serve and raise the injustice that has occurred, emerged from the experience of my difficult trip with an important outcome of the ideas for a more positive future Writing, communicating, publishing and supporting civil and humanitarian campaigns.

this article is written by Afrah Shawqi

In December 2016, Iraqi journalist Afrah Shawqi was taken from her Baghdad home by a group of armed men. They accused her of writing a story they found offensive and kept her captive for over a week, while her disappearance made international headlines. She was eventually released and now lives in France. 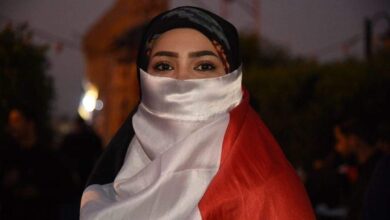